Noah Sarenren Bazee netted his first ever Bundesliga goal in Augsburg’s 3-0 win at Schalke 04 on Sunday.
The winger, who is eligible to represent Nigeria through his father, posted a topnotch performance to help end Augsburg’s six-match winless run in the Bundesliga. 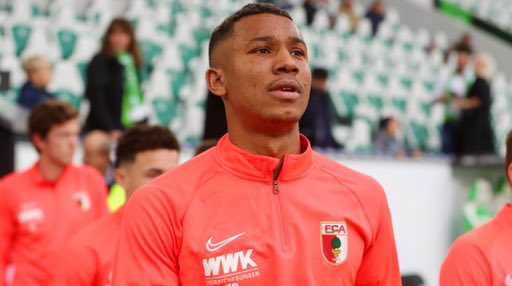 Playing alongside Germany U-20 player of Nigerian descent Felix Uduokhai, the 23-year old — who had tasted just 17 minutes of league action in three league games prior to the fixture — scored within 17 minutes of his introduction to make it 2-0, after Edward Löwen had put the Fugger City residents in a first-half lead with a well-taken freekick.
Bazee came on in the 59th minute, replacing Swiss midfielder Ruben Vargas.
The forward made the most of the opportunity to impress new coach Marko Herlich by delivering a right-footed shot – his only shot of game – into the top right corner to register his first-ever goal in the German top flight, despite being sandwiched by two Schalke defenders.
Sergio Cordova compounded Schalke’s woes by netting Augsburg third at the death. The Venezuela forward disposessed substitute Levent Mercan and rounded the onrushing goalkeeper, Markus Schubert, before slotting in a low left-footed shot from a tight angle.
While Bazee — who was invited for Nigeria’s friendlies against Senegal and Burkina Faso in March 2017 — came on in the second half, Uduokhai started the game and played till the end.
Uduokhai, who is on a €2.5m season-long loan from Vfl Wolfsburg, made eight clearances, 18 accurate passes — including three in the opposition half — and two blocked shots against Schalke.
The 22-year-old centre-back has 20 Bundesliga games under his belt this season.
Augsburg’s win extends Schalke’s run without a win in the Bundesliga to eight matches, but the Gelsenkirchen club stay on eighth spot with 37 points — four places and seven points above Augsburg on tbe Bundesliga log.