Lobi Stars have vehemently rejected the League Management Company’s plan to officially end the 2019-20 season and adopt the points-per-game (PPG) concept in determining final league placings and continental competitions qualification amid the coronavirus crisis.
The 2019-20 Nigeria Professional Football League campaign was suspended on March 18 as part of efforts to curb the spread of Covid-19, which has caused the death of hundreds of thousands of people across the world.
Fears over the spread of the virus also forced the government to announce a nationwide lockdown.
However, in May the lockdown was eased and business activities have since returned.
Since the lockdown was lifted, the LMC has been under pressure to restart the league and NPFL stakeholders have met a number of times via teleconferencing to discuss the way forward.
In those meetings, some stakeholders reportedly kicked against clubs playing the remaining fixtures, citing a number of reasons — including time and interstate lockdown.
Furthermore, some clubs proposed ending the season based on the table as of March 18 and the PPG principle adopted in arriving at final standings, but a number of clubs — particularly Lobi Stars and Akwa United — objected the proposal.
The issue generated controversy and on Sunday, the LMC decided to put the matter to a vote.

According to LMC sources, 17 of the clubs supported the proposal while three rejected it. Lobi Stars and Akwa United did not take part in the voting, while Enugu Rangers favoured a Super 6 tournament to determine continental places.
Lobi Stars, in a release on Monday morning, faulted the LMC’s plan to officially apply the PPG to determine the final standings.
According to Nigeria Football Federation rule, the top two NPFL teams represent the country in the Champions League, while the third team and Aiteo Cup winners pick Confederation Cup tickets.
Consequently, if the PPG method is adopted, Lobi Stars — who are third on the log — would lose their CAF Confederation Cup place, as they would drop to fourth. 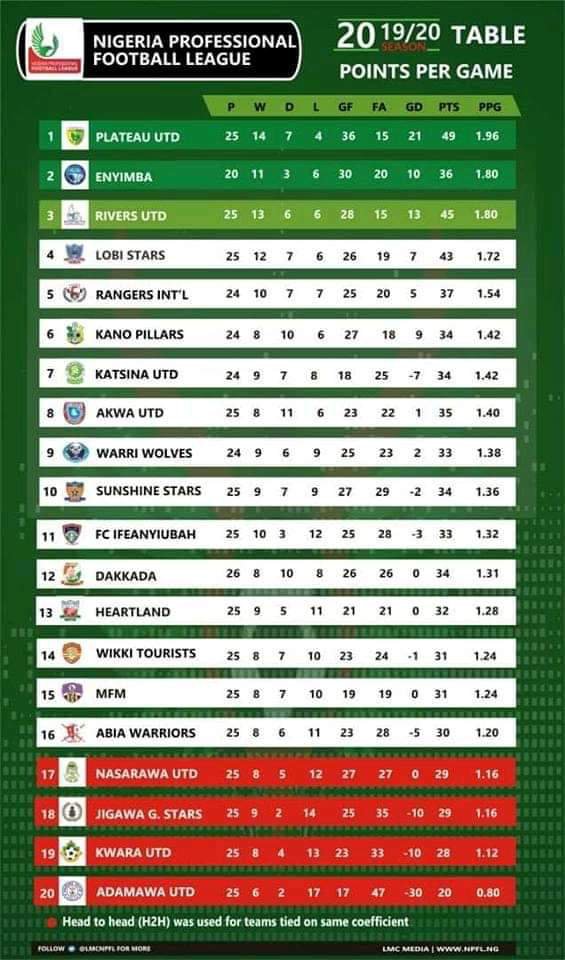 Second-placed Rivers United would lose their CAF Champions League spot and drop to third spot.
In all of this, Enyimba — who have five games in hand — would be the biggest gainers, as they would move from fifth up to second in the standings and thus book a place in the CAF Champions League.
Given that Lobi would lose out on continental football if the league body goes ahead with the plan, the club deem the decision unacceptable.
They Makurdi club took to their social media accounts on Monday morning to reject the plan, stating: “We hereby call on the Minister of Sports and The Nigeria Football Federation(NFF) to disregard the charade displayed by the club owners in an attempt to perpetrate the PPG illegality, look at the merit of the matter and make sure a fair and conventional option is arrived at.
“We say No to PPG and table adjustment, as PPG has never been an option in case of force majeure and can not start now.”